How satellite collars are paving the way for smarter saiga conservation

“It is hard now to even imagine how we could protect saiga without the use of satellite telemetry,” says Albert Salemgareyev from the Association for the Conservation of Biodiversity of Kazakhstan (ACBK), in-country partner of Fauna & Flora International (FFI).

He is speaking about ACBK’s latest efforts to track the movements of saiga antelope across the vast steppes (grasslands) of Central Asia. The information that is being collected through this long-standing work is helping FFI and partners to better understand the long-term impacts of infrastructure developments on saiga movements and population recovery.

Saiga are migratory animals that travel thousands of kilometres between their feeding, calving and overwintering grounds every year. The immense size of their territory poses a challenge both for the saiga themselves and for those working hard to conserve these animals.

“One of the biggest problems for any migratory species is that their migration routes – which are usually deeply ingrained and inflexible – are easily disrupted by infrastructure developments such as roads and railways,” explains David Gill, FFI’s Acting Deputy Regional Director for Eurasia. 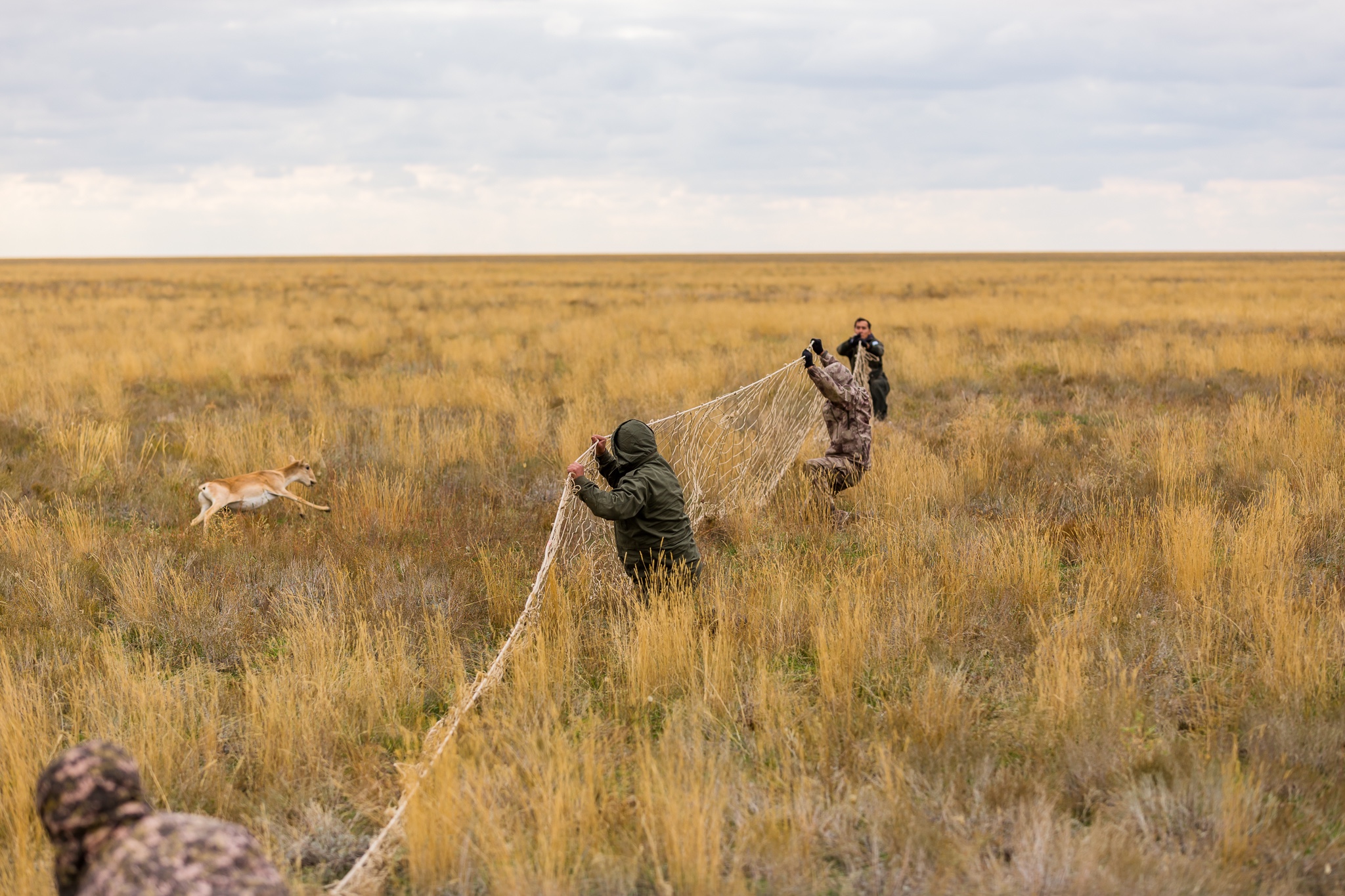 Since the collaring work (which is led by ACBK and supported by FFI and other partners) began in 2009, 180 saiga have been successfully fitted with satellite collars. The information they are generating is helping us build up a picture of how existing infrastructure is affecting these animals, which in turn allows us to overcome these problems.

One such example was a border fence that was erected between Kazakhstan and Uzbekistan in 2012. “The collars showed that the fence had stopped the saiga migration in its tracks,” says Gill.

“However, thanks to this long-running research, we were able to successfully mitigate this problem by using the telemetry data to pinpoint where the fence intersected with the saiga’s usual migration route. This then allowed the authorities to adapt key sections of the fence so that the saiga could move through it, and we were delighted when the collar data revealed that the migration had restarted.”

But just as one hurdle was (almost literally) overcome, another was added in the form of a new railway line. Once again, the collar data showed that the migration of saiga between Kazakhstan and Uzbekistan had halted, and although the Kazakh government then added ramps to allow saiga to cross the line, the collars showed that these had not worked.

Puzzlingly though, the most recent data has shown that, in 2020, a few saiga were able to cross the line through some natural gullies that undercut the railway. Snowfall was unusually low last year, which may explain why the saiga were able to travel through the gullies. The researchers hope that the saiga collars fitted this year may provide a clearer picture of what is really going on and help them design better modifications to the railway line that will allow the saiga migration to recommence in earnest.

Getting a global picture

The collaring programme goes beyond simply looking at infrastructure impacts, however.

It also allows field staff to monitor the herds closely and combat poaching, and has even helped conservationists and government partners in saiga range states to design and establish around 2.4 million hectares of new protected areas and ecological corridors. 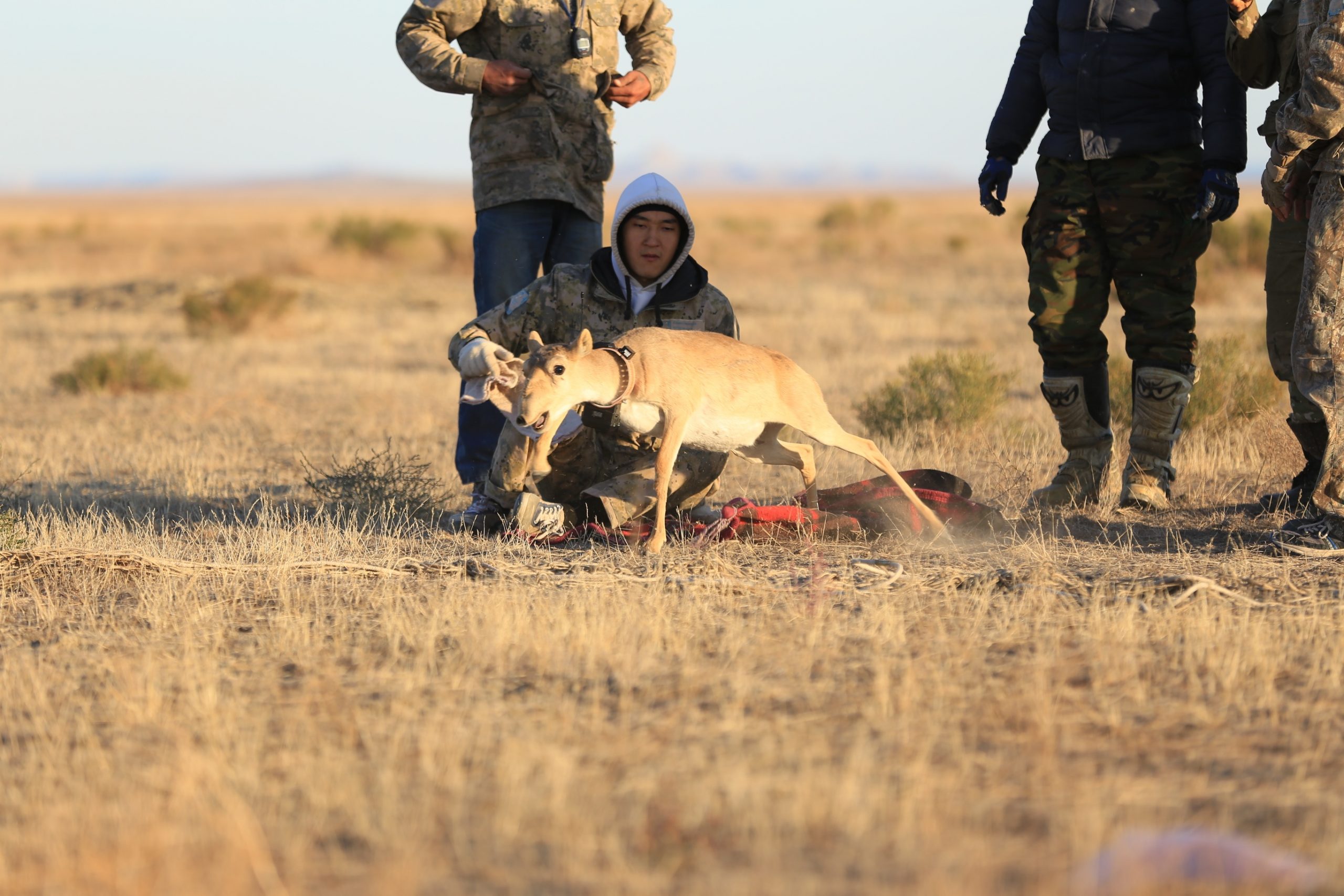 The addition of 24 new collars in 2021 will enable us to keep this important work going. Excitingly, the team also collared saiga from an unidentified population in the west of the country and collected genetic samples from these animals, which may provide crucial new insights into how the global saiga puzzle fits together.

The saiga’s long and winding path to a brighter future

Those who have been following the fortunes of this beleaguered antelope will know that conservation gains for the species have been hard won.

Around one million saiga once roamed across a 700,000 km2 area of Central Asia (for comparison, that’s almost twice the size of Germany), with vast migrations that would have rivalled the great wildebeest movements of East Africa. Tragically, however, decades of intense poaching coupled with habitat loss and fragmentation have taken their toll.

Adding further to their woes, saiga have also been beset by a number of alarming mass die-off events caused by deadly bacterial infections, the most recent of which saw 200,000 saiga – over 60% of the global population – wiped out in just a few weeks.

For a species already on the brink, many feared that the end may be nigh for the saiga.

Fortunately, the latest chapter in the saiga’s tale is a happier one. Numbers have rebounded quickly thanks to government efforts, which have been supported by the Altyn Dala Conservation Initiative (a partnership comprising the Kazakh government’s Committee for Forestry and Wildlife, ACBK, FFI, Frankfurt Zoological Society and RSPB).

As numbers grow, it is likely that the larger herds will need to expand their territory in order to find enough food and water. Climate change may also have an effect on the migration patterns. The collaring project will allow FFI and our conservation partners to respond to these changes as they emerge, allowing us to better protect these remarkable animals.

The critically endangered saiga is in urgent need of protection.
Please support our efforts to safeguard this incredible antelope.

With a BSc in Environment, Economics and Ecology, Sarah has long been fascinated with the challenge of balancing human needs and environmental protection.

Back to all news
By using this site you agree to our use of cookies. Find out more here
Close and don't show again